The Journey to Australia

Pai Lum (literally White Dragon) Kung Fu is an eclectic style, with a strong basis in traditional kung fu. It was originated by Pai Po Fong, who combined White Crane and Dragon styles, and moved to Hawaii, where he taught Pai Lum to his grandson. His grandson, the late Daniel K. Pai, was our Grandmaster until his death in 1993. One of Grandmaster Daniel Pai's senior students, Master Thomas D. St Charles, in turn taught a young man, Murray T. Beatts, who moved to Ireland, where he became the Chief Instructor, and eventually achieved Master rank.

The Australian Chief Instructor, Neal Hardy, studied under Master Beatts in Ireland, and returned to Australia to teach here, after attaining Instructor (Sifu) rank. Master Hardy has been following the Way of the White Dragon since November 1981. 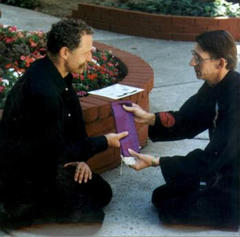 With the retirement of Master Beatts, Master Hardy journeyed again to the US in September 1999, where he met with members of other Branches of the large Pai Family. Pai Shinzan, now Grandmaster of the Shao-lin White Dragon Society, agreed to accept Master Hardy as his student, and in 2003 promoted him to 4th Level Master Instructor in Pai Lum Kung Fu. Grandmaster St Charles made Master Hardy an adopted Grandson with the name Pai Lung Tsai Hsia, or Under Dragon. In 2005 Grandmaster St Charles promoted Master Hardy to 5th Level Master Teacher. With this strengthening of the links with the US Dragons, Fire Dragon Australia can grow in breadth and depth!

In 2011, Grand Master St Charles promoted Master Hardy to Grand Master level. The independence given to Fire Dragon Australia will in no way lessen the strong ties the Australian Dragons have for their US Brothers and Sisters. 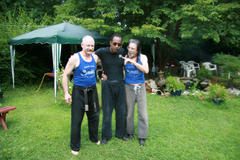 Pai Shinzan introduced Grand Master Hardy to other Branches of the Pai Lum Family, who have added to his understanding of the Way of the White Dragon. Regretfully, Pai Shinzan passed from this life on 4 May 2017, but leaving a legacy of his knowledge with his students and the very many who attended his courses.

Grand Master Hardy continues to seek knowledge, with gratitude to all his Instructors and Teachers, both past and present, and of course particularly to Pai Shinzan.