Sifu Hardy ran a Day Course for Fire Dragon students on September 7. Students had waited a long time for this year's course, which had been delayed due to Sifu Hardy's having had some torn cartilage removed from his knee earlier in the year.

So the Day Course was well attended, and students enjoyed learning some different techniques and approaches to self defence, with work on new forms, and a good emphasis on meditation and Ch'i development. 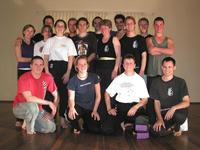 Students at the conclusion of the 2002 Day Course

The ACT National All Styles Championships were held on 22 September, with just three Fire Dragon competitors taking the floor, but all performed very well!

Dave - Grasshopper - Davis is the 2002 ACT Novice Forms Champion; Stephen - Mantis - Wells ACT runner up in both Intermediate Forms and Point Sparring, while Pierre (Goanna) Skorich is runner up in Black Belt Forms, despite being only a Yellow Sash in Pai Lum!

Sifu Patrick Bellchambers provided very capable judging and refereeing assistance at the tournament, of which Sifu Hardy is Technical Director.

Sifu Hardy has commenced formal weapons training for senior students (generally Green Sash and above) who are interested, on the first and third Mondays of the month. It is an opportunity to work with weapons (particularly long staff and broad sword) in a controlled environment, and is being used by several students.

Basics including wrist and shoulder strength are being developed, together with forms and exercises to understand how weapons work.

Live blades are being used by those who can afford them, although all weapons are treated with the respect due a live weapon!

Sifu Hardy was invited by Shifu Ron Gonninen of KOBGK Paihequan International CRane Fist to participate in a gathering in Wellington NSW on Saturday October 20. It was a very good weekend, with several diffreent styles participating, and an excellent exchange of techniques and philosophies.

October 27 was Active Australia Day, and after an early morning radio interview, Sifu Hardy led a good number of Fire Dragon students and guests in an hour long training session on Downer Oval. 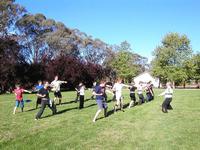 Everyone letting some punches fly!

Some of the ladies really got into the spirit of defences against grabs - it was great to see! 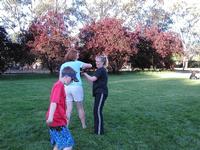 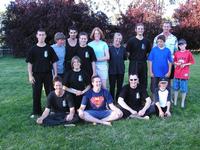 And - many smiles when the session finished. 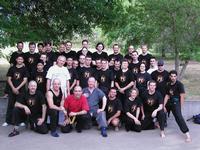 Students were immersed in Martial Arts from 10.00 am Saturday to 5.00 pm on the Sunday, learning a variety of techniques, including against knife attacks, and also including learning from forms.

Early risers on the Sunday (and ALL Fire Dragon students were early risers!) worked out on the river bank, finishing with meditation to th sound of running water, sighing breeze and singing birds.

During the camp, Chris Gunton and Dave Davis graded to Yellow Sash (though Dave was not aware he had been grading until he passed!). 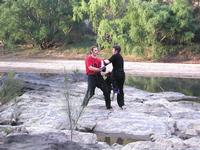 Working out by the river presents challenges as well as serenity! 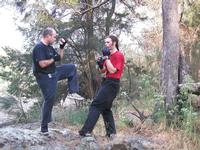 Not quite a mountain top, but good practice! 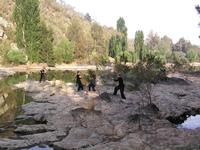