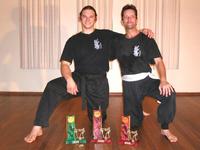 Fire Dragon Australia presented its 2002 Annual Demonstration on 24 March. After an introduction by local Democrats MLA, Roslyn Dundas, some 20 students and Sifu Hardy entertained a rapt audience with techniques from beginners as well as seniors, including forms, sparring, weapons, and spectacular breaking.

Ma Gai, the Rock and Sifu Hardy demolished stacks of concrete (Sifu Hardy's on fire of course), followed by Sifu Hardy lying on broken glass, while Sifu Belchambers lay on a piece of concrete on Sifu Hardy, and more concrete was broken on top of him!

The event was covered in the local press, with a multifaceted article by Ian Warden of the Canberra Times.

Kristeen - our Reluctant Dragon - was awarded her Yellow sash for her performance at the demonstration, and a display of the spirit of the White Dragon. 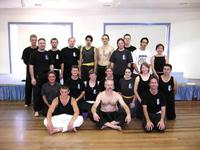 The May NAS took place on the 7th. Four Fire Dragon students entered, and all brought great credit to the Club. Patrick - Shr Zr - placed himself out of the Forms trophies despite a very good first form, and while fighting well, was knocked out by a well placed hook kick, to come away with second place in Men's Open Point Sparring.

Jayne, Ma Gai, came first in Women'sOpen Forms and Open Continuous Sparring, first in Veteran's Forms, and earned yet another first in the Senior Demonstration Division with a broadsword form.

A significant trophy hall by Fire Dragon from the May NAS competition.

Sifu Hardy and his students were invited by Master Robert Z of Liang I (5 Animal) Shaolin Kung Fu, to participate in his Club's 10th anniversary celebrations on June 29. Ingrid - Little Leopard - , Paul (Mr Smooth), and Patrick, put on a short but stunning demonstration of the Way of the White Dragon with Sifu Hardy. Fire Dragon was treated like members of the Liang I Family. It was a very rewarding weekend, with the Canberra Dragons retunring tired but well pleased (and very well fed!). 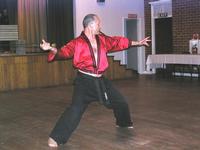 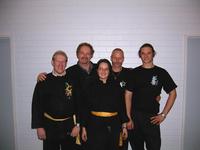 In late June and early July, White Sash student Frances Michaelis returned briefly to Canberra from California, and came to train with Fire Dragon. Frances has enjoyed Martial Arts success in her time in California, and came first in her age group and class in the First Annual Female Martial Arts Tournament, with a very creditable score for Forms. 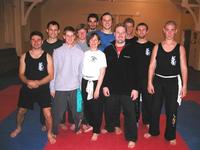 Frances - on her visit back downunder, with her fellow students.

The last qualifying round of the 2001-2002 NAS circuit took place on July 14. Because of illness, only Ma Gai - Jayyne - was able to compete, but Sifu Bellchambers managed a hard day's work judging. Jayne came first in Women's Black Belt Sparring, and Black Blet Forms, third in Demonstration, and in Female Veteran's Sparring. A hard day, but well done! 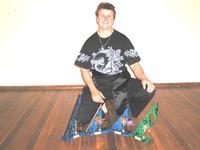